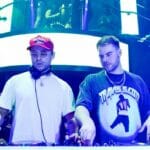 Party Favor and Nitti Gritti of SIDEPIECE have been teasing “Just A SIDEPIECE” on tour for roughly three years now. On December 13, the “On My Mind” production pair took to Twitter to share an unexpected YouTube link, writing,

“YOU ASKED FOR IT. HERE IT IS. ‘JUST A SIDEPIECE’ IS UP NOW, ONLY ON OUR YOUTUBE!”

The domineering house duo is currently prepping for their long-awaited “Kiss And Tell” tour. The four-stop concert series begins next year on February 11 at the Showbox SoDo in Seattle, Washington. Thereafter, SIDEPIECE will make their way to a secret location in Brooklyn, the Hollywood Palladium in Los Angeles, and finally, the Ogden Theater in Denver, Colorado.

Fans can purchase tickets to any of the four concert dates here. In the meantime, watch the official lyric video for “Just A SIDEPIECE” below.