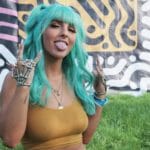 Njomza has just dropped her second album single, “over and done,” from her forthcoming June 18 LP, LIMBO, and she’s enlisted some pretty talented friends to help her. Among those enlisted for new record are Skrillex, Olu Fann of EARTHGANG, award winning producer Tommy Brown, and more. Now, ahead of her sophomore album, Njomza and Skrillex are putting another collaboration in the books, recalling back to their first release together at the height of OWSLA’s reign in 2016 on “Pretty Bye Bye.”

The new collaboration, “over and done” encompasses contemporary pop tropes with a strong bassline, head-bobbing beat, and not to mention Njomza’s particularly powerful vocal dynamics. The track painfully captures the heart-wrenching feeling of uncertainty and loneliness, visually represented in the music video with Njomza sitting solo on a couch riding around Los Angeles. Recognized for her songwriting chops on Ariana Grande’s Grammy-nominated thank u, next, Njomza’s writing abilities have only deepened with her latest releases, and “over and done” is just another notch in the German-born talent’s belt. Watch below.

The post Skrillex and Njomza reunite for second collaboration, ‘over and done’ appeared first on Dancing Astronaut.