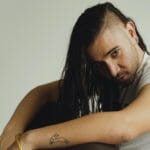 Skrillex is back with his second drop in a week, delivering a pair of new tunes for the first time since summer 2019. Reportedly stashing a trove of new material slated to land this year, the OWSLA boss has shared the latest collaboration off the stack of new music he’s sitting on, turning in “Too Bizarre” after a flurry of social media activity around a teaser snippet of the track. Hot off the heels of “Butterflies,” the grooving new house-leaning cut with Four Tet and Starrah, Skrillex is once again adding to his widespread collaborative ranks on “Too Bizarre,” with vocal contributions from the Grammy-nominated rhymer Swae Lee and multi-hyphenate talent Caroline Miner Smith, better known as Siiickbrain.

Swae Lee, who has built a reputation around his instantly recognizable hooks and melodic versework, brings his signature style to “Too Bizarre,” accented by Siiickbrain’s shrill vocals and Skrillex’s ever-crisp production backdrop. Grungy, distorted guitar licks carry the track, peppered by Swae Lee’s filtered ad-libs, positioning the new joint effort somewhere between the alternative, R&B, and electronic spaces at once. Complete with a new visual feature that places all three collaborators in a sweaty basement jam, “Too Bizarre” occupies a blend of genres that all hold special sway in Skrillex’s musical complexion as the superstar producer continues his comeback campaign.

Watch the music video for Skrillex’s new single, “Too Bizarre” below.

The post Skrillex continues comeback campaign with Swae Lee and Siiickbrain on, ‘Too Bizarre’ appeared first on Dancing Astronaut.