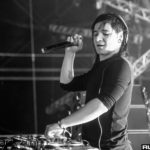 Ever get the feeling that New Music Friday just can’t come fast enough? Well thanks to Skrillex, it came early.

The OWSLA label boss took to his very own subreddit (r/Skrillex) late in the evening on June 9 to dish fans a pre-release download of “Supersonic (My Existence),” another collaborative masterpiece from Skrillex that merges the talents of Josh Pan, Noisia, and singer-songwriter Dylan Brady. Sonically, the release falls a bit closer to the bass-centric sound of Skrillex’s past than other recent releases, but still highlights Sonny’s artistic sensibilities through avenues of composition, mixing, and overall musicality.

“Supersonic (My Existence)” is scheduled to hit stores and digital streaming services on June 10, but can be downloaded early at this link.