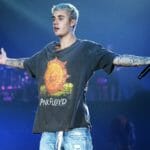 Skrillex, TroyBoi, and Virtual Riot, among others, have scored slots on the Justice guest list. Justin Bieber‘s sixth studio album, due March 19, will notably bear both Skrill’s and Virtual Riot’s touch on its opening number “2 Much.” Skrillex’s flourish extends to two other Justice tracklistings, “Somebody” and “Loved By You,” the latter of which also calls on Burna Boy. Ryan Tedder receives writing credits on “Somebody”; Jon Bellion is credited as a co-writer on “Loved By You.”

TroyBoi will assist on a Justice bonus track. Features outside of the electronic scope include Daniel Caesar, Chance the Rapper, Khalid, Giveon, The Kid Laroi, and Benny Blanco. View the Justice tracklist below.