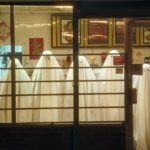 One thing is for sure—Skrillex is back. Though, as his comeback campaign rolls forward, the LA-based superstar is clearly having fun keeping everyone guessing with a creative stretch of the legs. Starting with an artful collaborative piece alongside Four Tet and Starrah, “Butterflies,” then bouncing from the genre-blending appeal of “Too Bizarre” with Swae Lee and Siiickbrain to the gritty drum ‘n’ bass stylings of “Supersonic (My Existence)” with josh pan and Dylan Brady, all in less than two month’s time, an older, wiser Skrillex has emerged, and he refuses to be pinned down by a single sound. Now, he’s headed back to where things started this year, delivering the full visual for “Butterflies.”

Skrillex’s latest adds to a long line of fascinating music videos over the years from the OWSLA head honcho. Often narrative in style, driven by airtight choreography, and shot practically with key CG elements and VFX to help bring the story to life, the video for “Butterflies” falls right in line with a lengthy list of incredibly well-produced visuals. Much like the song itself, the video delicately walks the same balance between convivial and haunting, placing the track’s soul-stirring, gated vocals against a gripping visual backdrop of ghostly figures, elegant blocking, and a shrouded cityscape.

Watch the music video for “Butterflies” below.