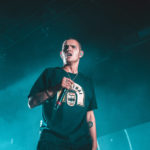 UK rapper slowthai gears up for his sophomore album TYRON with its latest offering, “MAZZA.” The hip-hop cut instates the inaugural collaboration between the Northampton-bred artist and A$AP Rocky, who takes on the latter half of the track. TYRON will be available February 5 on Method/AWGE/Interscope.

Featuring production from slowthai and frequent collaborator SAMO, “MAZZA” follows previously released singles “feel away” with James Blake and Mount Kimbie and “nhs.” The forthcoming record will be presented in two thematic halves, with the Rocky-assisted track and its relatively harder-hitting stylization, landing on the first disc. “MAZZA” welcomes a dreamlike loop and crisp beat as slowthai conveys raw rapid-fire verses, contrasting with Rocky’s slick delivery.