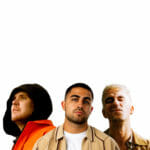 With “Moonlight,” Smoko Ono says he “wanted to create a song that makes you feel like you’re in another world.” Couple smoky, futuristic sonics with the heady skill of SG Lewis and R&B singer Rich, and the Windy City producer can consider “Moonlight” an aesthetic bullseye hit.

Laced with touches of pop influence, “Moonlight” shines through to streaming platforms in a sensual, synthwave-led, R&B-inflected haze sure to further heighten fans’ thirst for Smoko Ono’s debut LP, from which “Moonlight” comes. The album, led by “Moonlight,” “You Are” with Corinne Bailey Rae and UMI, and “Winners” featuring Yxng Bae, Chance The Rapper, and Joey Purp, is set to surface sometime in 2022.

On the electronic end, “Moonlight” emblematizes the industry’s steadily increasing interest in involving SG Lewis as a producer/featured collaborator. Since the advent of his debut album times in February, the Brit has lent his talents to a variety of acts, including Folamour (see “Lost in Space“), James Vickery (“Finally“), and Elton John (The Lockdown Sessions‘ “Orbit”), among others.