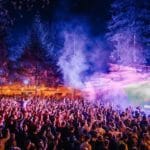 In 2022, Mayrhofen, Austria’s Snowbombing festival will return after a two-year hiatus to feature appearances from Bicep, CamelPhat, Andy C, a DJ set from Rudimental, and Gorgon City, all of whom are included among Snowbombing’s first wave of artists. Hannah Wants, Danny Howard, Eats Everything, Solardo, and Franky Wah also figure on the initial roster of talent tapped for the 2022 event, with more acts to be announced later this year.

In addition to the featured artists, Glitterbox, Defected Records, Sink the Pink, He.She.They., and Bez’s Acid House will host stage takeovers across Snowbombing’s stages, with each stage catering to a different theme such as forest and street party. The 2022 iteration is Snowbombing’s answer to the COVID-19-related cancellation of the 2020 festival, and will take place from April 4 – 9, 2022. Purchase tickets and learn more here.