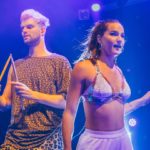 Sophie and Tucker have expressed their long-standing interest in Brazilian and Portuguese culture through the course of over 300 livestreamed DJ sets on Insomniac TV’s House Tuesday, conveying their pleasure of those sets and their love of Brazil to assemble an elated set of cultural sounds and rhythms. The Grammy-nominated duo spoke of the opportunity to remix the track stating,

“Growing up, we both heard about the greatest soccer player of all time, Pelé. He always felt like more of a myth or a god than a real human. Sophie’s imaginary friend growing up was even named Pelé after him. The fact that we got to work on a song of his was a surreal experience. But we didn’t just do it because of who he is. The song is awesome and it makes us want to dance. The children’s voices are so uplifting and the way he laughs at the end really makes us smile. Also of course we love Brazilian Portuguese passionately, so all around it was a dream.”

Listen to Sofi Tukker’s remix of “Acredita No Véio (Listen To The Old Man)” below.