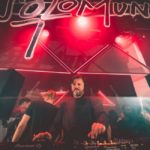 In preparation for his upcoming sophomore album Nobody is Not Loved, Solomun deploys his new high energy single, “Tuk Tuk.” Featuring rising art-pop duo ÄTNA, the futuristic tune crash lands as the first album single to see fruition in 2021.

Floating in with airy vocals and an inviting beat, Solomun’s latest offering quickly transitions into a darker, house identity intertwined with velvety vocals and a reverberating bassline that embody a sense of true badassery. Accompanying the new release is the “Tuk Tuk” music video which features one half of ÄTNA, Inéz, fighting her way to eventually becoming a mafia ring leader. Solomun hinges his upcoming album upon the “Tuk Tuk” music video—the intended message being that music will always prevail.

The house veteran has been hard at work over the past year creating his own imprint, NINL, which has housed his latest singles as well as collaborations with the likes of Jamie Foxx, Planningtorock, Zoot Woman, and more. Nobody is Not Loved is set to release May 21, 2021, and fans will hopefully be seeing much more from Solomun until then.

Tagged as ATNA, music, ninl, Nobody Is Not Loved, Solomun, tuk tuk.