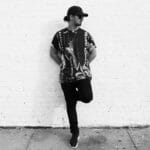 Coming off of his official “Heat Waves” remix, and a lauded Diplo collaboration, Sonny Fodera has returned with another melodic house original. “Closer” features Swedish YouTuber Lilly Ahlberg, who offers her refined, summer-centric topline that evokes an atmosphere that beckons for a rose-colored beach sunset.

Fodera, with production assistance from British electronic duo Just Kiddin, delivers “Closer” just ahead of a jam-packed summer festival schedule in the UK. On top of an upcoming solo headline tour, the Aussie talent has three dates locked in London and Bristol for a series called Back To Love. The three shows, co-hosted by Gorgon City, will take place at Finsbury Park and Greville Smyth Park, respectively.

“Closer” could not have arrived at a better time, as we prepare for long overdue collective reunion on dance floors across the world. Purchase tickets for Fodera’s upcoming tour here, and check out the official visualizer for “Closer” below.