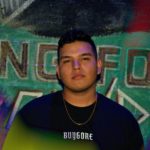 Two of the heavier side of bass music’s most promising up-and-comers have teamed up to release a dance floor-devastating dubstep tune on Borgore‘s industry staple, Buygore Records. Venezuelan producer Madreckless first burst onto the scene in 2018 with his hit Riot Ten collaboration, “Act A Fool.” Madreckless has since released a slew of tunes on Steve Aoki‘s Dim Mak Records and dubstep powerhouse label Disciple: Round Table. Madreckless’ collaborator, Texas native Soundwreck, has been making waves in the Texan bass music scene, performing at multiple Grimefest renditions and landing releases on both Buygore and 40 Oz. Cult. Partnered up, these two are a force to be reckoned with.

“Wreckless” opens with a large cinematic soundscape that leads into an increasingly tense buildup. The song’s first break opens with an unapologetic sound design flex that is temporarily unaccompanied by drums. As soon as the dubstep drums kick in, aggressive, metallic synths create an exceptional headbanger experience. The track’s second break repurposes the sounds in a creative way with phrasing modifications that are equally as heavy. Watch out for these two ascendant acts as the year forges on.