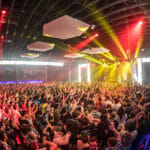 Shortly after unveiling a talent-laden lineup for Echostage‘s grand reopening in June, Club Glow has tapped eight acts that will make a splash at the Washington D.C. venue from July 2 – 4. Joining Echostage’s roster of talent are NGHTMRE, Habstrakt, and WAVEDASH, who will appear on July 2, followed by Steve Aoki and Cedric Gervais on July 3, and Loud Luxury, Ship Wrek, and Cat Dealers on July 4.

The newly named holiday weekend performers join Echostage’s staggering event lineup, which currently spans live sets from Zedd, David Guetta, Tiësto, Alesso, and Tchami in June, fellow July appearances from Diplo and MEDUZA, and a slew of late summer and fall events that will call forth Dom Dolla and Sonny Fodera, Lost Kings and Sigala, Zeds Dead, and many more

Tickets to each of Echostage’s upcoming events, including the July 2 – 4 run, can be purchased here. Doors to each event will open at 9:00 p.m. ET.