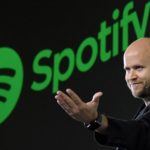 Spotify’s CEO, Daniel Ek, shared on Twitter that he would be interested in buying English Premier League club, Arsenal.

The tweet was prompted by thousands of fans protesting against the club’s current owner, Stan Kroenke, for his role in the failed European Super League project. The protests were urging the current owner to sell, sharing banners “Arsenal till I die. Kroenke out,” and “Our club our home. Sell up Stan.” Kroenke also owns the NFL’s Los Angeles Rams, the NBA’s Denver Nuggets, and the NHL’s Colorado Avalanche.

The Super League had been announced last week, with 12 of Europe’s most famous soccer clubs, including Arsenal, saying they would join a closed competition with no promotion or regulation for founding members. The European governing body UEFA and domestic leagues had not consented to the breakaway Super League. Due to the backlash, Arsenal and five other English soccer clubs had announced they would be pulling out of the Super League, all but dismantling it.

While Ek has offered to buy the club, Kroenke and his family have insisted they have no intention of selling.

Ek himself also spurred controversy last summer, when he made a comment stating that artists not making enough money from streaming was a “narrative fallacy,” and said that “some artists that used to do well in the past may not do well in this future landscape, where you can’t record music once every three- to four-years and think that’s going to be enough.”

Many artists began speaking out against Ek’s statements, including Herobust, MUST DIE!, Chet Porter, and more.