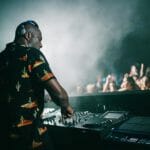 After announcing in October that certain countries would be able to include full mixes from select DJs, Spotify now moves to expand that content initiative with the addition of more artists. Fans in the United Kingdom can browse through available mixes from the likes of Idris Elba, Koven, Bleu Chair, Wax Motif, Nicky Romero, and Gabry Ponte.

Upon the launch of artist mixes during the first week of October, Spotify had previously announced that mixes from Noisia, Adam Beyer, AmyElle, Shingo Nakamara, and MOTi would be available in the United Kingdom, the Philippines, Australia, Ireland, Japan, the Netherlands, Indonesia, and New Zealand.