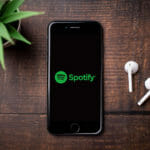 In an effort to show all of their 345 million users how distinctive each individuals’ music taste truly is, Spotify has offered iOS users their latest in-app feature, Only You.

The new features displays an interactive slideshow that reminds users exactly what their special listening patterns are. The slides include listeners’ wide array of differing artists, genres and songs, and most-visited musical eras. Hopping on the Astrology bandwagon, the streaming giant offers Your Audio Birth Chart—a personalized astrological “reading” that takes users’ favorite artists and breaks them up into Sun, Moon, and rising: top-played from the last six months, streamers’ more vulnerable side, and an artist they’ve recently fallen in love with. Finally, the feature presents Dream Dinner Party, giving listeners a choice of their favorite artists with whom to have their hypothetical dream meal.

In addition to warming the hearts of their subscribers with their own unique tastes, Spotify has also revealed Blend, a feature that allows users of both iOS and Android devices to combine tastes with friends and other users. The feature allows streamers to invite their friends and Spotify does the rest, curating a playlist that unites the tracks each user listens to, serving as an exciting way to reconnect after a long year of flagrant separation. Blend is set to continuously update alongside users, allowing for their respective tastes to potentially morph into something new.

The post Spotify unveils personalized ‘Only You’ in-app feature, as well as new Blend mixes appeared first on Dancing Astronaut.

Tagged as blend, new feature, NEWS, Only You, Spotify.

JAY-Z becomes the most Grammy-nominated artist in history