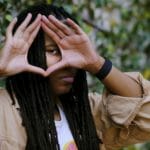 Starrah‘s debut album, The Longest Interlude, makes a splash on streaming platforms with 13 tracks spanning guest appearances from the likes of Skrillex, Nile Rodgers, James Blake, and many more. The Grammy-winning producer and songwriter said of her inaugural long-form,

“I put everything into this album because it’s my diary, the raw soundtrack to my life. The Longest Interlude describes a love story from the highs in the beginning to the lows and hardships that most can relate to, so I am super excited to share this with you all. This is a moment in time and a period of transition and possibilities.”

The Delaware-born rapper has been responsible for well-renowned hits such as Rihanna‘s “Needed Me,” Travis Scott‘s “Pick Up The Phone,” and Camilla Cabello and Young Thug‘s “Havana,” to name just a few. In 2017, she released a collaborative EP with Diplo titled Starrah X Diplo and has previously worked with Destructo and Cashmere Cat. The Longest Interlude is an emotional rollercoaster of R&B, hip-hop, and pop influences and even features a long-awaited Skrillex collaboration titled “Twenty4.”

Stream The Longest Interlude below.