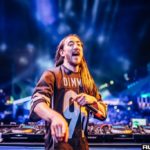 Whether it’s investing in Team Rogue or doing a Meta Threads collaboration, Steve Aoki has become well known for not only his music but also his interest and investment in the gaming and esports space. This trend is slated to continue with Aoki’s launch of yet another collaboration into space, namely his new Dim Mak x Street Fighter set, developed in honor of the 2021 Capcom Winter Update and Prize Fighter event.

The set will feature a “Dim Mak x Street Fighter” apparel drop, a limited edition counter-cade in partnership with Arcade1Up, and an official remix of Ryu’s iconic theme song. The remix, dubbed “Ryu’s Theme (The Moe’s Pizzeria Steve Aoki Remix),” pays homage to Aoki’s love of the game growing up. When he was a child, Aoki would go to the local pizzeria arcade every day after school and play “until he lost,” which is why teaming up with game publisher Capcom for the three-part set means so much to him now.

Lastly accompanying the apparel drop is the Street Fighter two-player Counter-Cade, which is a limited-edition, four-in-one arcade system made in partnership with Arcade1Up.