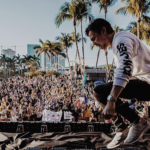 STMPD RCRDS has come out the gates swinging in the new year with a mixed bag of high-grade releases, and Martin Garrix‘s label is now uncovering three of the 10 total unnamed segments from his virtual appearance at Tomorrowland New Year’s Eve. Some fans had unofficially attached the authors to select tracks from the one-hour set shortly thereafter, and STMPD RCRDS has since substantiated those speculations with a triplet delivery from Julian Jordan, Aspyer, and MNNR.

The multi-part package contains three of the most coveted IDs from the Garrix expo, with each holding its own and exemplifying how STMPD RCRDS is one of the most promising labels not only in house music, but dance music as a whole. Julian Jordan pretended that he was unaware of the producer behind the ID during STMPD RCRDS’ guessing-game Tomorrowland video, but the “Big Bad Bass” owner’s involvement was clear as day from the get-go, and Jordan puts its name to proper use throughout the more than three-minute bass-riddled invention. Aspyer’s “Symphony” is perhaps the most originative STMPD RCRDS output of the trifecta, and flashes the Russian talent’s unrivaled knack with the violin. Rounding out the ID trinity is MNNR, who returns to the Dutch-based imprint for “Can’t Hurt Me Anymore,” a vintage four-on-the-floor product reminiscent of the 1990’s era of house.

Stream all three of the STMPD RCRDS releases in full below.