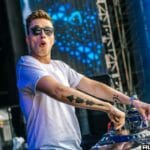 Nicky Romero takes another lap around the electronic release ring with a three-track EP billed to his side project Monocule. Monocule (Volume 2) positions two new songs—”Find You” and “Silence”—alongside the previously released “You Don’t Know.”

The EP extends Monocule’s sonic identity as that which is comparatively sinister to Romero’s own releases, providing him a creative platform for darker melodies. Monocule (Volume 2) follows the inaugural installment in the EP series, released in fall 2020. The sophomore EP is out now via Romero’s own Protocol Recordings.