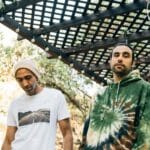 After three This Never Happened EPs, Sultan + Shepard finally release their Something, Everything LP on Lane 8‘s imprint. The soaring melodic house record marks Sultan + Shepard’s first album since 2019’s Echoes of Life: Day and Echoes of Life: Night, as well as TNH’s first full album release of 2021. Something, Everything also caps off an astonishing stylistic switch for a group primarily known for progressive house across their expansive career. In a mini-documentary, Sultan + Shepard explain the inspirations behind the new direction of their music:

“In 2019, we decided to take a break from touring. we had been on the road consecutively for a very long time and we were starting to get uninspired because we were basically just doing the same thing over and over for the last few years and we weren’t evolving our sound. So, we decided to take a pause and get back in the studio and really just try to figure out what it was that inspired us, what we connect with in an authentic way that really made us excited to make music again.

Before we even started messing around with new stuff, we actually just started listening to old records. Pulling out stuff from like Underworld, and UNKLE, and Sasha, Eric Prydz, M83, Brian Eno, that kind of stuff that really drew us to electronic music in the first place when we really got into it. But then also listening to the some of the newer progressive and melodic techno stuff that was inspiring us, you know, things like All Day I Dream and Joris Voorn, Lane 8, Yotto, Kidnap, and trying to find a place where we were able to go back to our roots, but incorporate all of the things we’d learned in the past 15 years producing so many different styles of music. So we wanted to be able to combine those two things into something new. Once that clicked in, we just dove in and we were writing a new song almost every day. Pretty soon it was kind of obvious that we were working on an album. “

Something, Everything was preceded by four singles, ranging from the wildly uplifting “Assassin” to the subdued “nCTRL.” Before it landed on Something, Everything, “Avalanche” premiered in Lane 8’s “Winter 2020 Mixtape.” Sultan + Shepard’s new record continues TNH’s seemingly endless hot streak, closely following EPs from Le Youth, Polar Inc., and Archaellum.

Tagged as music, something everything, Sultan + Shepard, this never happened.