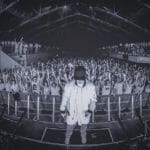 After gifting listeners with a full EP in 2020, Zack Martino has returned to the release circuit with a new single, “Lonely With You” alongside Jay Mason. The producer’s music gained considerable momentum in a short period of time due to Martino’s ability to float between mainstream appeal and satisfying house production, with catchy vocal construction at the forefront.

Throughout “Lonely With You,” a delicate melody coats the sonic bedrock of a subtle piano curtain that builds into a progressive house drop. Martino’s characteristic progressive energy, a quality that initially attracted his core fanbase, remains intact in his latest, and Mason’s vibrant vocals assist in rounding out the track.

“Lonely With You” is out now via Armada Music. Stream below.