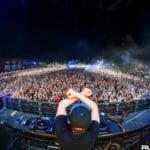 Despite only officially shelling out releases for less than one year, Excision’s Subsidia Records has quickly become a resounding pillar of bass music. After delivering Night Vol. 4 this past May, the label has now unleashed the gruesome sounds of the fourth volume of its Dusk compilation.

This grimy rendition of the series features heavy hitters from bass music’s finest such as Pax Impera, ZEKE BEATS, and Blvk Sheep, to name a few. Doing what Subsidia does best, the label also touts the scene’s freshest up-and-comers like Xotix, bd hbt, and Snowhite, all of whom bass fans can surely expect to see much more of in the coming months. Hinging all three compilation mixes, Dusk, Night, and Dawn, upon expert production design and new, exciting sonics, Subsidia never fails to create a visceral atmosphere, catering to only the best in bass music.