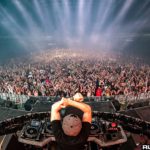 After two predecessors under the Night banner, Excision‘s Subsidia Records has returned with the fiery third installment in the compilation series. Subsidia Night Vol. 3 features 20 new tracks from artists such as Bear Grillz, Monxx, Skellism, and more. The LP is the seventh volume released across the Night, Dawn, and Dusk sagas since the label’s inception in September of 2020.

Night Vol. 3 continues Subsidia’s mission of debuting ascendant acts such as Svspkt, Autokorekt, SUFFOCATE, and more, while marking the return of Jessica Audiffred, Perry Wayne, NvrLeft, and Gladez, who was named one of Dancing Astronaut‘s Artists To Watch in 2021. Subsidia continues to breakdown musical barriers in its embrace of artistic diversity as Night Vol. 3 further preserves the champion sound of the dubstep genre.