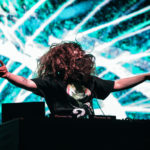 Bass music luminary Subtronics has penned an official partnership with online streaming platform Twitch. Subtronics has taken to Twitch off and on to stream performances or connect with fans, but going forward, he will host weekly livestreams featuring unreleased tracks, demo listening sessions, production lessons, special guests, and more, as he describes:

“Twitch is the easiest, most direct way to talk with my fans in real time. I love sharing my process and thoughts in regards to both music and life, so just having an audience of people who care to hang out virtually and listen to my silly rants is truly awesome and appreciated. I’ve also found a good bit of talent through Twitch chat rooms and other various dubstep streams on there. It has helped me scout talent and make friends, but most importantly of all, Twitch has helped me stay inspired.”

Despite festivals’ continued cancellation, Subtronics has managed to have perhaps the most momentous year in his career. In December 2020, he launched Cyclops Records with the 19-track Boot Camp compilation featuring the likes of LEVEL UP, Leotrix, Al Ross, Akeos, and Syzy. Additionally, the “Griztronics” collaborator recently delivered a vicious live set for Insomniac’s Park ‘N Rave concert series in San Bernardino, California. With his new partnership and label announced just months apart, Subtronics looks poised for a monstrous 2021.