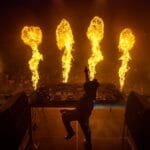 Through its bulldozing combination of wonky basslines and distorted rhythms, Subtronics’ new single with Ace Aura “Resist” exuberantly leads the cutting-edge 20-track label compilation which candidly follows Subtronics’ gritty collaboration with Excision “Bunker Buster” which landed back in April. Each of the compilation’s three subsets are designed with a specific bass niche in mind. From psychedelic, genre-fluid sonic musings, to battering low-end breaks, ranging between the experimental and the festival-ready, Planet Cyclops incorporates a wide variety of sub-genres that roaringly touts a number of exemplary approaches to bass music. Stream “Resist” as well as Planet Cyclops in full below.