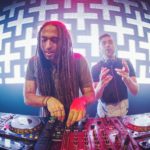 Sultan + Shepard have returned to This Never Happened with “Solid Gold Love,” a melancholic Richard Walters feature that doubles as the first single from their forthcoming 14-track album, Something, Everything, due on March 12.