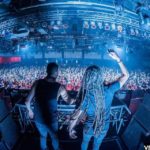 Revving up for their upcoming LP, Something, Everything, Sultan + Shepard are continuing the album rollout with its third single, “nCTRL,” released via Lane 8‘s This Never Happened.

In its slow build up to a stabilized techno-infused bassline, the Canadian powerhouse’s latest—which trails their last two album singles, “Assassin” and “Solid Gold Love“—treats fans to another progressive house orchestration. Although Sultan + Shepard indulged fans with three EPs in just 2020 alone, Something, Everything will be their first LP since 2019’s Echos of Life: Day and Echos of Life: Night. Stay tuned for Something, Everything‘s release on March 12, and stream “nCTRL” below.

The post Sultan + Shepard treat listeners to the third single from their forthcoming LP, ‘Something, Everything’ appeared first on Dancing Astronaut.

Tagged as Lane 8, music, nctrl, something everything, Sultan + Shepard, this never happened.