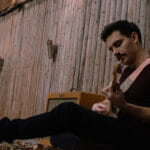 Douse QRTR’s “Blame Me” in disco, and at the intersection of texture and groove, you’ll find Supertaste and Sasha Rome standing behind an alteration threaded with funk-ridden string riffs. In a tangle of dance-worthy drum work, synths that won’t soon leave a listener’s head, and an anchoring bassline, “Blame Me” undergoes a contemporary disco-flavored revision that refashions the viscous original, newly lending it to head bobbing without overpowering the distinguishing facets of QRTR and Daniel de Lara’s outing.

Supertaste call “Blame Me” the product of “fluid and natural” collaborative interplay with Sasha Rome, an indie-disco sound spinner who closed out 2021 alongside Bonsai Collective on November’s “Taking Me For Granted.” Unified not only by their location—both Supertaste and Sasha Rome are based in New York—but also by their shared penchant for disco, the acts synergistically align on a polished version that takes the energy of a disco ball-bedecked dance setting and tempers it for a lazy afternoon spent rinsing sounds.