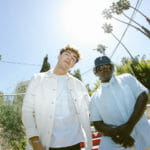 Just in time for the peak of summer, Surf Mesa and Bipolar Sunshine have teamed up for the shimmering single “Lose My Mind” released via Astralwerks. The single plays to each artists’ strengths flawlessly, showcasing Surf Mesa’s bright and breezy production chops while leaving space for Bipolar Sunshine’s vocals to float through the track. Drenched in pop influences with twinges of club-ready house strewn throughout, “Lose My Mind” is sure to make the rounds as the dog days of summer draw closer.

“Lose My Mind” continues Surf Mesa’s rapid ascent to stardom, closely following Tchami’s remix of Mesa and Madison Beer‘s single “Carried Away.” He might have blown up thanks to the TikTok popularity of “ily (i love you baby)” with Emilee, but since then Surf Mesa has permanently stamped his name as one to watch in the industry. In contrast, Bipolar Sunshine has made a career out of vocalizing some of the biggest dance hits over the last half-decade, and it seems he may have another smash on his hands.