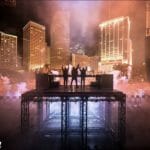 Nearly three years to the day of their Ultra homecoming, Swedish House Mafia have gone their separate ways from both Columbia Records as well as Ron Laffitte of Patriot Management, who substituted in as their manager in 2019 following a split with Amy Thomson, according to a report from Billboard. The Swedes struck a lucrative deal with Columbia in February of 2019 following a chaotic bidding war against Universal Music Group.

Swedish House Mafia have yet to release any new material in the years since 2012’s “Don’t You Worry Child” with John Martin, despite numerous IDs locked away in the vault from both their Ultra reassembly and short-lived reunion tour, including “Underneath It All” with Mike Posner, “It Gets Better,” and “Frankenstein” with A$AP Rocky. Beyond the trio’s support of Black Lives Matter in June of 2020, Swedish House Mafia have yet to reappear in the public eye since the final moments of 2019, although rumors of a possible EP sparked this past February following an Instagram live from Alexander Wessely, who confirmed he was in the presence of Axwell, Sebastian Ingrosso, and Steve Angello. Swedish House Mafia reportedly spent a portion of 2020 working on new music in Stockholm and the possibility of an album was also mentioned, according to Billboard’s sources, but it remains to be seen what happens with the Swedes now without a label.