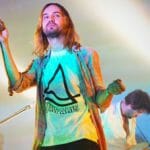 Kevin Parker has officially dispatched a new Tame Impala single, “No Choice,” that will appear on The Slow Rush Deluxe Box Set, due February 18 via Interscope. “No Choice” is one of two B-side tracks that didn’t make the final cut on the original 2020-released LP. The other embargoed tune, called “The Boat I Row,” will surface on the February release of the Deluxe Box Set, which features extended mixes and remixes, including the already-unveiled “Breathe Deeper (Lil Yachty Remix).”

On top of the original offering, Parker has also outlined Tame Impala’s impending North American tour dates. The 2022 tour run will kick off after two festival appearances at Innings Festival in Arizona, and at Okeechobee Music & Arts Festival in Florida, respectively. View the list of announced tour dates, and stream “No Choice,” below.