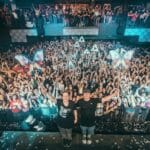 A healthy dose of zen from start to finish is what listeners should expect from Tritonal‘s newest album Reverence, sonically inspired by the art of meditation. The 14-track LP is born out of the spiritual journeys that Tritonal members Chad Cisneros and David Reed have embarked on, and the music emulates the meditative styles of artists like Brian Eno, Nils Frahm, and Ólafur Arnalds.

In contrast to the standard dance LP, Reverence was conceived as one continuous piece of music, where each movement is a harmonic counterpart to the preceding sonic maneuver. The final product is a Logic X Pro project consisting of over an hour of music and more than 417 audio tracks. Though Reverence is Tritonal’s fourth studio album, it is notably their first long-form ever executed as one unceasing body of music.

Reverence, which stands in stark stylistic contrast to Cisneros and Reed’s prior triplet of LPs under the Tritonal title head—U & Me (2019), Painting With Dreams (2016), and Piercing The Quiet (2011)—is out now via Tritonal’s own Enhanced Music and can be streamed below.

The post Tap into your inner peace with Tritonal’s ‘Reverence,’ inspired by the art of meditation appeared first on Dancing Astronaut.