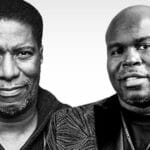 Ten City‘s first album in 25 years is on the way.

The Chicago R&B and house vocal group comprising Byron Stingily and Marshall Jefferson announced their forthcoming LP Judgement with Jefferson’s rework of their 1987 classic, “Devotion.” Of the 2021 update of “Devotion,” Jefferson said,

“The lyrics are about two women that myself and Byron went on a double date with. They seemed to have been in bad relationships before. Byron started singing and we came up with the idea that if previous men had treated them better, they wouldn’t be so bitter. I took Byron’s original and positive vocal ideas, ‘I want to give you Devotion,’ and came up with the music the same night because it was a great vibe.”

The hit single, an extended version of which was included on their 1989 debut album, Foundation, receives a lush rework from Jefferson that stays true to the group’s soul, disco, and Chicago house roots. Jefferson’s conversion of “Devotion” will soon be packaged on a remix EP (due March 19) that will also include an underground remake from Glasgow-based duo Illyus & Barrientos. In the meantime, Ten City and their fans alike will also be anticipating the release of their fifth studio album, Judgement, which is slated to arrive this summer via Ultra Music.

Listen to Marshall Jefferson’s rework of “Devotion” below.