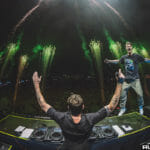 If the first couple days of 2022 are any indiction, we’re in for quite a year of new music. In the aftermath of the madness that is New Year’s Eve, The Chainsmokers have now popped back up to surprise deliver their first release in over two years—and their first remix in more than seven years—through their official SoundCloud page. The duo’s out-of-the-blue rendition of Bon Iver’s 2011 cover of Bonnie Raitt’s 1991 hit “I Can’t Make You Love Me” was exclusively sent out through the duo’s fan text message community.

The Chainsmokers have been notably quiet since their chart-topping album World War Joy took over in the dance music world in 2019 and announcing a social media hiatus to focus on their fourth LP. And while they have continued to appear at festivals and in Las Vegas, we’d yet to receive any indication of new music aside from an incoming album ID that the duo debuted at their EDC Las Vegas set back in October. And both the EDC ID and their “I Can’t Make You Love Me” rework seem to be signaling a melodic house direction—also re-employing Drew Taggart’s own vocals—for The Chainsmokers compared to the uptempo, pop-heavy sound of World War Joy. Fan calls for The Chainsmokers to revisit the remix era—which included classics like their takes on Smallpools’ “Dreaming” and Tove Lo’s “Habits—that preceded their ascent to international superstardom have now been answered.

Shared as “a gift for your patience” while The Chainsmokers continue to finalize their fourth album, the remix can be streamed through their private SoundCloud here.

The post The Chainsmokers end two-year release silence with surprise cover of ‘I Can’t Make You Love Me’ appeared first on Dancing Astronaut.