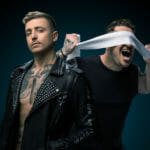 Bigroom royalty has returned, as Blasterjaxx unveil “The Crown,” their third clubs-tomping single in just as many weeks. The tune-a-week trend is set to continue up until December 3, when the Dutch duo is set to unveil its much-anticipated Mystica Chapter II EP.

What makes Blasterjaxx such a special act isn’t necessarily their larger than life image, but rather their constant ability to live up to and even surpass it. It’s easy to sit here and call their big room sound “anthemic,” but Blasterjaxx have cultivated a sound that’s truly beyond that. At the risk of sounding hyperbolic, Blasterjaxx’s sound is epic; it’s mighty.

Their new single demonstrates this in a fluid fashion, setting a fantasy-inspired soundscape, then conquering it with powerful drops and hands-in-the-air melodies. A world unto itself, “The Crown” makes it clear that Blasterjaxx have turned the page in their songwriting and productions. Listen to “The Crown” and other morale-boosting tracks from Blasterjaxx’ upcoming EP Mystica Chapter II via the playlist below.

The post ‘The Crown’ shows why Blasterjaxx are the kings of bigroom appeared first on Dancing Astronaut.