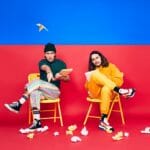 Niiko x SWAE have enlisted coproducer Zack Martino and singer-songwriter Kyle Reynolds for a new single sure to stick in streamers’ minds like “Glue.” The one-off is the outcome of an Instagram exchange that transpired between Niiko x SWAE and Zack Martino, and doubles as a pre-EP single arriving ahead of Niiko x SWAE’s Field Trip.

Buoyed by a bustling piano line and building progressive house chord progressions, “Glue” provides a lively foundation for Reynolds’ topline, which takes listeners on a vocal journey about heartbreak and the glue that can hold everything together. The enthralling combination of instrumentals, vocals, and production takes a piece of each artist’s sound and creativity fuses it into one cohesive output.

Following the single’s release, Reynolds took to Instagram to reveal that Prince Fox is an unnamed collaborator on the single, further sweetening the collaborative outing. “Glue” is out now via Armada Music.