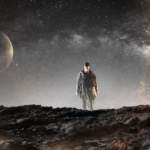 In November of 2020, Far Out gave flight to Beyond The Horizon. The Ophelia Records label debut, made across four inclusions, constituted the emergent tastemaker’s Ally Thorn, RØRY, Heather Sommer, and Monika Santucci-assisted breakout on Seven Lions‘ platform. Fast forward four months after the EP’s November 5, 2020 premiere on Dancing Astronaut, and Far Out and Dancing Astronaut can be found aligning once again, forging another alliance that qualifies for “must-listen” status: a glittering guest mix.

Our wager? We won’t mince words—Far Out will be melodic enthusiasts’ next favorite ascendant act. Sitting at just over one hour’s runtime, Far Out’s exclusive mix adds a bolder outline to what the dance-versed currently know about his magnetic sound. As on his Beyond The Horizon EP, Far Out’s penchant for toplines supplied by female vocalists, bass punctuation, and emotive chord progressions is potently apparent on the mix.

The producer, who not only made his live debut at Electric Daisy Carnival Las Vegas‘ 2019 iteration but also supported Illenium on his 2019 North American tour, said of the endeavor,

“This mix represents a blend of cinematic and melodic music that I’ve been exploring with the project. Although this past year was a challenge for everyone, I’m very grateful to have connected with new and existing fans online and how positivity always carries the day. Looking forward for what 2021 and onwards has in store, and much love to Dancing Astronaut for the continuous support.”

Expect a diverse array of sounds to euphorically collide. Spoilers include the Zedd remix of Skrillex‘s “Breakn’ A Sweat,” Far Out’s own “Apex,” Seven Lions’ “Only Now,” among Beyond The Horizon looks and original material from other melodic Jedi. Stream episode 137 of The Radar below.

Follow Dancing Astronaut on Audius here. Up-and-coming creators and producers are encouraged to submit their music for a chance to be featured on The Space Station, our exclusive Audius playlist focused on exposing new and exciting music from independent artists. No matter the genre, let us hear what you’re making. Submit here.

The post The Radar 137: Mixed by Far Out appeared first on Dancing Astronaut.