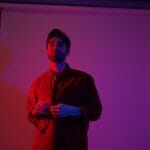 Beginning his artist project in 2019, Mindchatter has quickly climbed the ranks of the electronic hierarchy as a singer, songwriter, and producer. With early support from Pete Tong on BBC Radio 1 and taste-making playlists like Friday Cratediggers on Spotify, he’s earned a multitude of Hype Machine No. 1s and further cemented himself as a genre-defying musician on his 2020 debut album Imaginary Audience.

With initial remixes from Rome In Silver and Walker & Royce, the full project recently saw its very own remix package, which featured an array of groovy reworks from Dirtybird label signee Justin Jay, remix connoisseur Johannes Brecht, and more. Some of these aforementioned remixes can be heard on episode 141 of Dancing Astronaut’s The Radar mix series, which showcases Mindchatter’s presence as a live performer and his overall musical prowess in the nearly 60-minute masterpiece.

Kicking things off with just one of many of original IDs, Mindchatter graces listeners with a blend of house music and funk-infused beats alike including tracks from Fred again…, Claude VonStroke‘s collaboration with Steve Darko “How Many Times,” the famed Walker & Royce remix of his album track “Language,” and more.

The post The Radar 141: Mixed by Mindchatter appeared first on Dancing Astronaut.