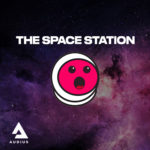 Since 2009, Dancing Astronaut has been sharing music for the love of it. Like many electronic music fans, we grew up on Soundcloud. We got our start sharing mash-ups, bootlegs, and remixes from then unknown artists who were pioneering a new style of sound on the internet. Unfortunately, those days are far behind Soundcloud, but our crate-digging and music-sharing obsession is still going strong. And, if you’re anything like us, you’re sick and tired of seeing the same artists populating every EDM playlist on Spotify.

So where do you turn? The answer is simple; AUDIUS.

Finally, there is new platform that’s as exciting as Soundcloud felt during those early years.

Every week, we’ll be updating The Space Station. On it you’ll find some familiar faces and plenty you’ve never seen before — and that’s the point. No label plants. No walled gardens. No slotting fees. Just good music, updated every week.

This week we’ve got exciting new music from The Reindeers, Dillon Francis remixing Daft Punk, a bad ass edit of Breach’s classic “Jack,” a Kanye West bootleg from back before Kim ruined him, a house highlight from Nick Martinez, and over 30 other tracks that you won’t find anywhere else.

We’re looking for submissions from creators and producers to submit their music to us to be featured on the playlist. No matter the genre, let us hear what you’re making.

Head over to the /r/audius to submit your tracks.