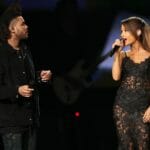 The Weeknd and Ariana Grande prove to continue to be a complementary pair, reuniting for their third collaboration, this time updating After Hours cut “Save Your Tears.” The two have previously collaborated on “Love Me Harder” in 2014, and more recently in 2020 on Grande’s Positions with “off the table.” Now the two superstars notch yet another collaboration, this time around adding an animated feature to accompany the new take on “Save Your Tears.”

The Weekend has maintained his barreling forward momentum into 2021, sharing his beloved debut mixtape House of Balloons on streamers for the project’s 10th anniversary, and netting a historic benchmark with 2020’s “Blinding Lights” spending a full year in Billboard Hot 100’s top 10. What’s more—the Canadian crooner has a Showtime feature documenting his Super Bowl LV performance due out later this year and a global tour in support of After Hours planned in 2022.

The post The Weeknd and Ariana Grande reunite for ‘Save Your Tears’ remix appeared first on Dancing Astronaut.