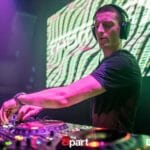 Thomas Xavier set the bar high for 2022 after debuting in 2021 with not one but two EPs, not to mention a sprinkling of original singles. After entering the year with his G-house-guided Go To Church EP, Xavier doubled down on the format with his iamrecords-issued Pussy on a Pedestal EP. In the mere few months that have followed the latter project’s September release, Xavier has gone on a year-ending tear, taking “MFFH” to Uttermost in October and “Level Up” to G-Mafia Records in early November.

It’s to G-Mafia that Xavier returns for his 2021 finale, “Takin Flight.” The high-octane house cut sees Xavier take his heaviest handed approach to the genre yet, shaking up his style with a trap break but keeping things familiar with a characteristically in-your-face vocal. Capping off a year punctuated by opening stints for Boys Noize, whose +/- figured on Dancing Astronaut‘s record of the top electronic albums of 2021, BIJOU, Dom Dolla, and Destructo, among others, “Takin Flight” is a tasty embodiment of Xavier’s G-house-cued creativity.

The post Thomas Xavier closes the curtain on 2021 with ‘Takin Flight’ appeared first on Dancing Astronaut.