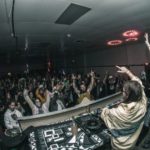 The music video for “Living Right Now” follows Tiedye Ky as he visits all of Pipus’s favorite places throughout his hometown of Philadelphia in an artistic collection of scenes that shot on a Super 8 camera. The video is also his announcement of the Pipus Forever Mural Project, developed to not only raise money but also collect signatures to support the creation of a mural for Pipus in Philadelphia.

In an official release, Ky said,

“The ‘Living Right Now’ music video is a tribute to my late homie Pipus. When I heard of his passing, I didn’t believe it at first. I almost laughed and thought ‘man he really got us this time, this will be his ultimate skit. It’s his way of putting on his greatest show.’ He was always smiling, always laughing so hard. His presence in a room outshined and broke down the very walls he stood within.”

Those who would like to donate to the Pipus Forever Mural Project, can do so here.