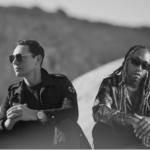 Tiësto kicked off his worldwide deal with Atlantic Records with “The Business,” and now, more than 200 million streams later, the producer has teamed up with Ty Dolla $ign for a follow-up anthem “The Business, Pt. II.” The original single is part of a promised forthcoming LP from the veteran, and “The Business, Pt. II” presumably is a welcome and unexpected addition to the impending body of work.

Rumors that a collaborative effort involving Tiësto and Ty Dolla $ign first began to swirl when Dolla tweeted, “Let’s get down to business!” which was later replicated on a billboard. “The Business, Pt. II” weaves the fabric of the original behind a new vocal line by Ty Dolla $ign, and the track changes just enough to keep the magic of the original alive while adding a new dynamic to the release.

Tiësto spoke about “The Business, Pt. II” in an official release, stating,

“The worldwide response to ‘The Business’ has been incredible. There is nothing better than combining diverse sounds and genres to create something truly special and Ty’s smooth R&B vocals really takes this track to the next level. I have always been a huge fan of Ty’s work… he’s an exceptional talent and I am thrilled we got to collab on this. I am very excited to share this new version with both of our fans around the world!”