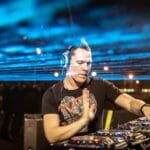 ATB‘s “Your Love” receives an alternate spin from one of the all-time greats, Tiësto. The veteran German DJ reimagined his 1998 trance classic “9 PM (Till I Come)” alongside Topic and A7S in January, and Tiësto channels the very same nostalgic energy with his alteration.

The Dutch talent said of his edit,

“‘9PM (Till I Come)’ is one of my favorite songs of all time from back in the day. I grew up on that song. ATB asked me if I’d like to remix his single…and here we are!”