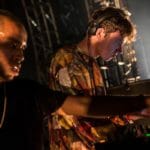 At the eleventh hour, TNGHT’s second single of 2021 has arrived. Following up “Tums,” “Brick Figures” is a brilliant exhibition of Hudson Mohawke and Lunice’s jaw-dropping sound design capabilities. Without a standard song structure, the three-minute track delivers so much in such little time.

One might even link the song’s experimental production style to that of the late SOPHIE. Now entering their thirteenth year as a duo, TNGHT continue to exhibit the ability to push their once trap-oriented sound into strange, enticing new spaces each time they resurface. Delivering on their characteristically brazen audio-visual style once again, stream TNGHT’s official visualizer for “Brick Figures” below.