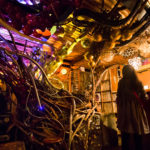 Tokyo is the latest in a long list of cities and countries that have reinstated their lockdown measures due to a resurgence of COVID-19 cases in the area. A state of emergency was declared in the Japanese capital on January 7, causing previously opened nightclubs to close their doors temporarily in order to respond to the government emergency mandate.

Oath, Aoyama Tunnel, and Red Bar, famed locations in the city, came together to release a joint statement stating their closure beginning on January 7. Currently in effect from January 7 to February 7, the mandate responds to the surging rate of over 2000 new cases per day in Tokyo. The reopening of nightclubs at a normal capacity after the mandate’s supposed end remains to be seen.

In a state of emergency, the Japanese government is able to request that businesses close or shorten their hours. They have also imposed a new restriction that requires bars and restaurants to stop serving alcohol after 7pm, effectively forcing nightclubs to shut down or modify their hours. Bar Bonobo is an example of a club looking to modify operating hours, and they have promised to post an update on modified hours soon.

The Japan Times also reports that officials are looking to pass a law that would fine businesses who do not comply to closure requests. Meanwhile, the government is currently urging citizens to remain home outside of essential travel.

Swedish House Mafia will close the Coachella mainstage on the Friday