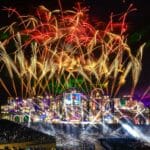 Tomorrowland wants to ensure that both Tomorrowland Around the World and Tomorrowland New Year’s Eve were one-off occurrences. Following the Belgian festival’s pair of virtual substitutes in the second half of 2020, Tomorrowland is reportedly looking at various alternatives if the event cannot be held on their original dates this summer, including pushing their July weekends to the end of August and beginning of September, according to Belgian outlet Gazet Van Antwerpen.

Tomorrowland spokesperson Debby Wilmsen told the publication that “a shift of the date is possible, a different interpretation of the festival is also possible, with more or fewer stages or acts.”

It was reported last June that Tomorrowland was also considering the possibility of an additional third weekend this year to offset financial costs from their 2020 cancellation, although that idea appears to be unlikely as the clock ticks closer to July. Tomorrowland is currently scheduled to be held across July 16 — 18 as well as July 23 — 25.

The post Tomorrowland is considering moving to the end of August appeared first on Dancing Astronaut.