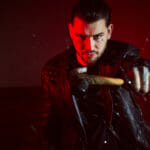 Boasting bass drops as devastating as a nuclear bomb, Trampa‘s ungodly UK dubstep sounds heavily translate to the DJ’s debut album Disrespect, out now via Never Say Die. Spanning dubstep to drum ‘n’ bass, the 10-track LP encapsulates the finest of all avenues of bass music and invites appearances from Killa P, Vulgatron, and Space Laces. To celebrate this project’s triumphant release, Dancing Astronaut spoke to the producer, whose tunes are inescapable in nearly every dubstep set out there. Learn more the creative process that dealt Disrespect below.

Tell us about the writing process for this album. How long has it been in the works?

Trampa: “Well, because of COVID-19, I had a lot of time to work on it! The time spent inside allowed me to be as creative as I liked in the studio, with no restrictions. The oldest track on the album probably had been in the works for about two years, but from the day that I decided I was going to write an album until the date it was finished, it probably took up to about six to eight months.”

Did the lack of shows during the past year affect your writing process or change how you wrote the music that appears on this LP?

Trampa: “If anything, not playing shows has allowed me to spend a lot more time in the studio. A heavy touring schedule has a pretty negative impact on my writing process. With clubs closed, I have felt less pressure to make something that works on the dance floor, allowing me to be more creative in the writing process.”

Do you have a favorite track from the album?

Trampa: “I would say my favorite track from the album is probably ‘Disrespect’ because I feel it encapsulates everything that Trampa represents. It’s Trampa in a nutshell. Also, working with Space Laces was an honor. I’m not just saying this for the purpose of this interview—he is genuinely one of my favorite producers ever.”

What differences do you see in the UK and US styles of bass music and how have these discrepancies influenced your production approach?

Trampa: “Drum ‘n’ bass is probably one of the biggest influences in the UK scene. It may not be the most commercially successful, but it has stood the test of time here. It was actually the first genre I ever produced. While it has never really taken off in the way dubstep has in the US, it’s still one of my first loves and I am pleased to be able to represent that on the album.”

With all of the knowledge that you’ve gained as your career has progressed, what is the most important piece of advice you can give to upcoming artists?

Trampa: “The most important piece of advice I can give up-and-coming artists is to stay true to yourself, first and foremost. Make the sounds and music you want to make—and if people like it, then that’s a bonus. If you have your own sound and stick with that, you will stand out a lot more. Of course, new production skills and techniques come in all the time, but you should always have your own sound. “

Speaking of upcoming artists, are there any rising stars you’ve been keeping an eye on lately?

With the album now out and live shows soon to make a comeback, do you have any exciting plans for the rest of 2021 you can share?

Is there anything else that you’d like to add?

Trampa: “This album has been a long time coming for me. It’s the hardest I’ve worked in my entire career, and I hope that shows. Also, this pandemic has been a tough time for all of us and I can’t wait until I’m playing shows again and back with everyone. Thanks.”